Since starting this website I have noticed a steady decline in the number of abandoned vehicles around London. The decline has been attributed to a combination of prompt council action to remove them , helped by the rising value of scrap metal. Only a few years ago you had to pay to have your vehicle taken away to be legally scrapped but now firms are paying around £100 to take away your old car for scrap. Its even been known for pick up trucks to scour areas looking for abandoned looking vehicles & some unscrupulous scrap collectors have taken away unroadworthy looking vehicles from peoples driveways without permission!I still stumble upon a few vehicles when off the beaten track....... 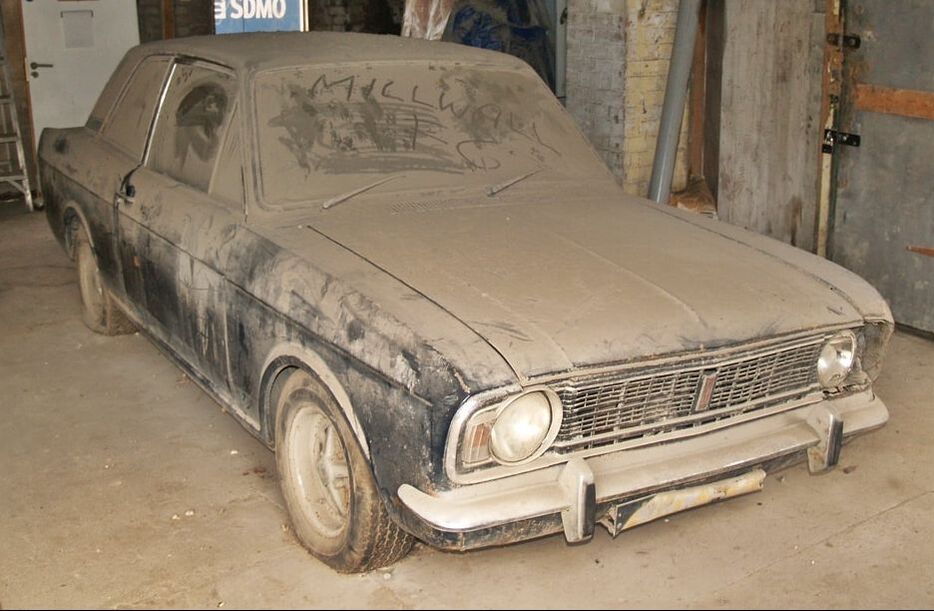 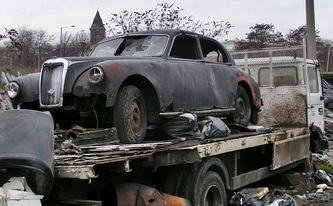 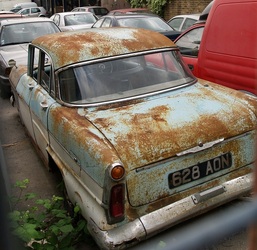 ​Imperials Prestige Used Cars - Chadwell Heath,Romford. RM6
​This site remains derelict after a huge fire ripped through this luxury car dealership in November 2018. Around 125 firefighters spent almost nine hours tackling the fire at Imperials. Several vehicles, including two Land Rovers, a BMW and a Mercedes, were destroyed in the fire though luckily nobody was injured.Explosions were narrowly avoided as firefighters were able to drive around 40 cars offsite and remove and a number of pressurised gas cylinders from the scene.

The cause of the fire has been treated as suspicious 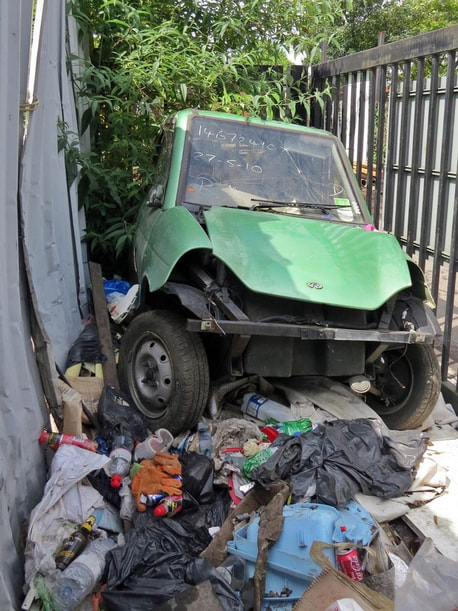 The clink of glass milk bottles as they are deposited on doorsteps and the hum of the milkfloat pulling away at the crack of dawn is pretty much a thing of the past in London. Cheap milk in supermarkets and superstores means that many people are no longer attracted to the idea of having pints of milk dropped off on the doorstep every morning.

They probably also reckon that bottles of milk get stolen. 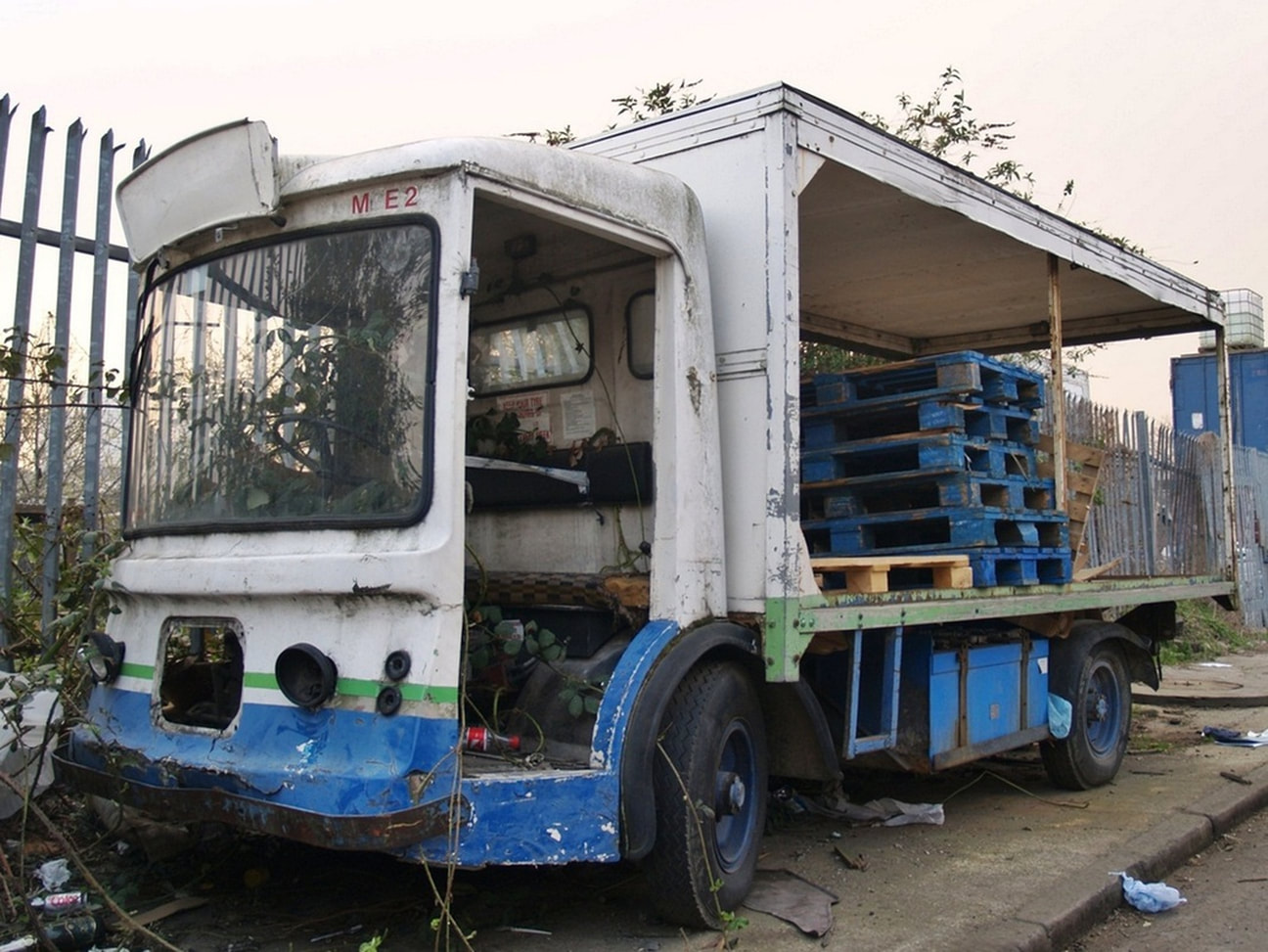 Both of these iconic British cars were spotted neglected & rotting away in people’s gardens – the Ford Cortina Mark 2 in Clapham and the Austin Mini in Woodford. The Cortina is around 40 years old, being one of the million or so made between 1966 and 1970 (very few survive today). The Mini was, of course, the most popular British-made car ever, with over five million manufactured between 1959 and 2000.

Apart from the fact that both cars are rusting away, they also have in common a Michael Caine connection. He drives a silver Mark 2 Cortina in the 1971 film Get Carter and the Mini played a key role in the 1969 cult film The Italian Job.

The sewage works here closed in the 1960s and the site has been used as a dumping ground ever since. The vehicles shown here may well have been stolen before they were torched. Years of fly-tipping have led to claims that the land is contaminated and so unsuitable for residential development.

Mark Holland writes "Looked at your website this morning, just browsing through the photos, when I came across the vehicles in Fiern Barnet sewage works. As I got to the bottom of the page I saw the distinctive shape of a beetle, same year as mine. Then I noticed the bumpers - still in top condition despite everything else rusting away.

It's such a shame to see a bug rust to death, so I wondered if I could at least salvage the bumpers. I had no idea when those photos were taken, but I thought it worth a gamble so I headed up north and met a friend at Bounds Green.

We found our way to the site and climbed up an embankment to discover an area vastly different from the photos on your site. Every track was overgrown with deep undergrowth. It was like stepping into a jungle. Most of the wrecks were covered in thick weeds. Then by some stroke of luck I found the bug.

Luckier still, both the back and front bumpers were still in good nick although the bolts were firmly rusted in. With some encouragement we freed them from the frame and lugged them back to the road. I emerged covered in mud and blood but two bumpers richer. Got a few strange looks lugging them back on the tube." 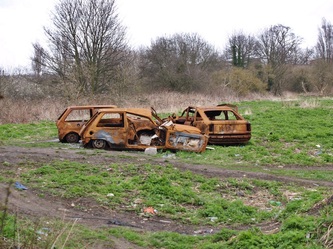 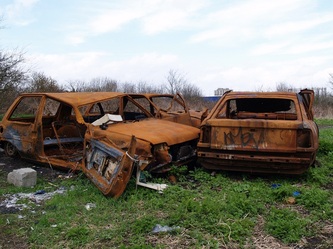 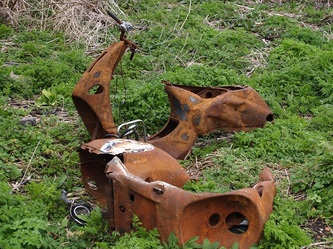 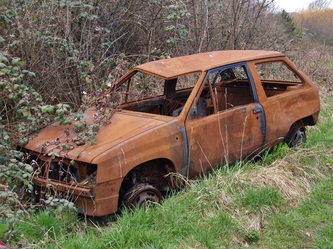 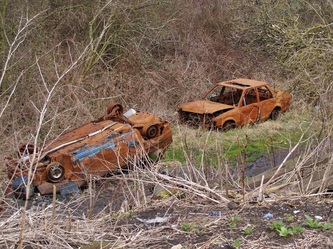 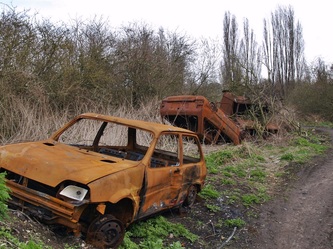 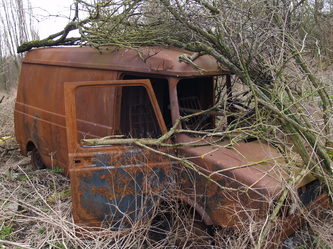 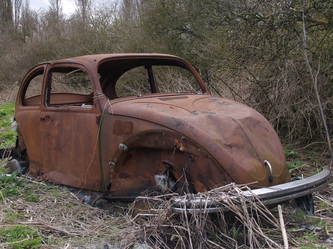 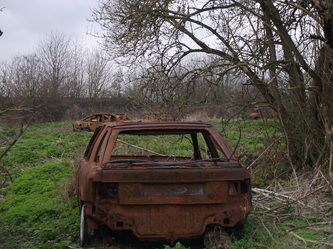 The Volkswagen Type 1, widely known as the Volkswagen Beetle was produced by the German Volkswagen (VW) from 1938 until 2003. With over 21 million manufactured the Beetle is the longest-running and most-manufactured automobile of a single design platform anywhere in the world. Here are a few decaying Beetles spotted around London. 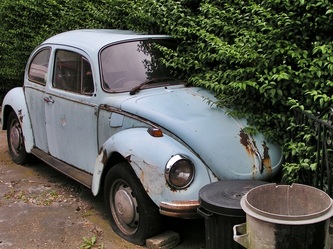 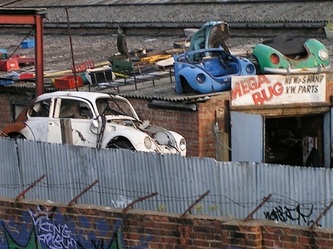 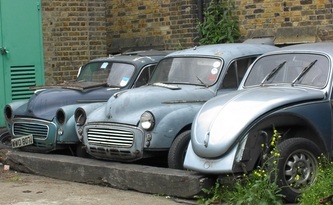 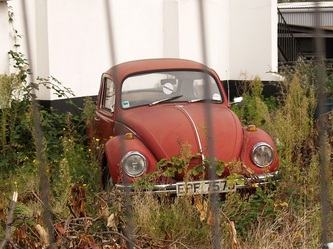 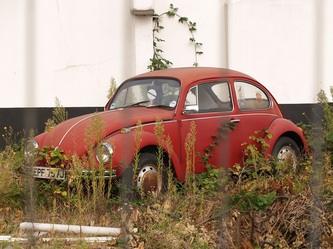 Scrap  and builders yards situated near the Westway and within a stones throw of the new Westfield Shopping Centre.

Something that is not quite derelict but but dont look too healthy. These red vans are spotted parked around Brixton and Dulwich but rarely seen being driven around. Local folklore thinks there is something sinister about them and a guy who drinks in a Camberwell boozer once went as far as saying they were undercover spies camped in them. (But....im sure its all gossip and that these vans provide a decent service)