The Kings Head - Walworth, SE17 (left) 2008 and (right) Today
The South London Press reported in 1903 that the potman here was charged with stealing 5 shillings from the landlord and sentenced to 21 days of hard labour.

The Kings Head was renamed Monaghan's Bar during it's final years and closed down in 2006 before briefly becoming a carpet shop in 2007. Then boarded up as you can see in my pic from 2008 and soon after that it became a William Hill betting shop though they have recently vacated the premises. Some of the old brewery tiles remain at the side of the building. 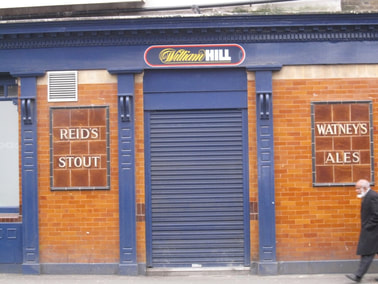 A majority of this street overlooking Denmark Hill railway station remained derelict for many years.

The houses were built in two stages between the 1860s and 1880s as speculative suburban development to designs by a local builder. The houses were originally occupied as private residences but since the second part of the twentieth century they had been used for medical purposes and as living quarters for nurses at the local Mawdsley Hospital. Most recently they were used as interlinked buildings as a methadone maintenance clinic and medical research facility. As they fell into dereliction they were squatted for a while in the early 2000s.

Architects wisely concluded that the street facades of the buildings make a positive contribution to the conservation area. The front elevations have good quality Victorian features, though the rear elevations were much less intact and had been altered significantly. The rear parts of the buildings were demolished and replaced to   provide the necessary quality of accommodation to meet modern medical use requirements.

Some of the houses have been refurbished and reinstated as private town houses whilst some have been converted into 24 bedroom temporary accommodation in conjunction with the NHS and Ronald Macdonald House and provides accommodation for parents whose children are being treated in King’s College Hospital. The corner properties fronting onto Windsor Walk from the rear of the Addiction Sciences Building, described on their website as the premier centre for mental health and related neurosciences research in Europe. Here the rear of Windsor walk looks very different these days. 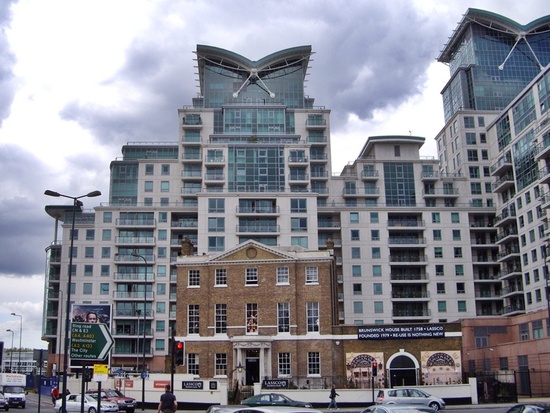 Brunswick House Today
A Georgian mansion house, built in 1758 and listed Grade II. Purchased in 1811 by Friedrich Wilhelm, Duke of Brunswick, who fled to England after taking part in the battle of Wagram against Napoleon but returned to Brunswick in 1813 and was killed in battle two years later.

There was talk of moving the whole building to Camberwell, although conservation bodies unanimously reject this as tantamount to demolishing the building. Everyone from the Spitalfields Trust and the Georgian Society to the Lambeth councillor responsible for planning, expressed concern about the property's deterioration, and it was put on the Buildings At Risk register. It was bought by the London and South Western Railway in 1850, and was occupied until recently by a railwaymen's social club, was sold at rail privatisation  in 1996. Finding its owner to enforce repairs led to confusion over how to save Brunswick House.

Now dwarfed by the St George Wharf development in the background (on the site of the demolished  Nine Elms Coldstore which once also dwarfed it), Brunswick House has now been restored by a firm called Lassco who are using the building as a shop selling fascinating architectural antiques & salvage such as old fireplaces from old properties.
Mark Wells writes to Derelict London: "I lived in Vauxhall from 1964 to 1975 and used to play on the derelict land behind Brunswick House in Vauxhall. Where the posh housing blocks are now was completely derelict and if I remember there were loads of old disused double-decker buses and coaches dumped there and me and my mates used to play on them. I remember the day after decimalisation came in (I was nearly 7) we found loads of old pennies lying around there, and we tried to buy sweets and lemonade at the local offie. Luckily, the old bloke who owned it was senile and accepted the money, and we came away with a feast of sweets of pop. I sometimes drive pass and always think of those days." 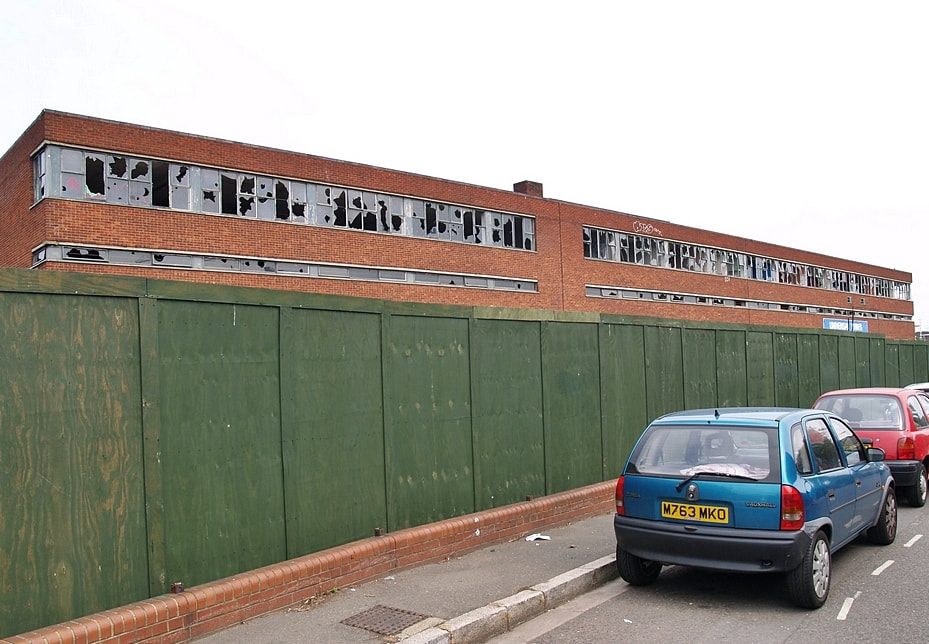 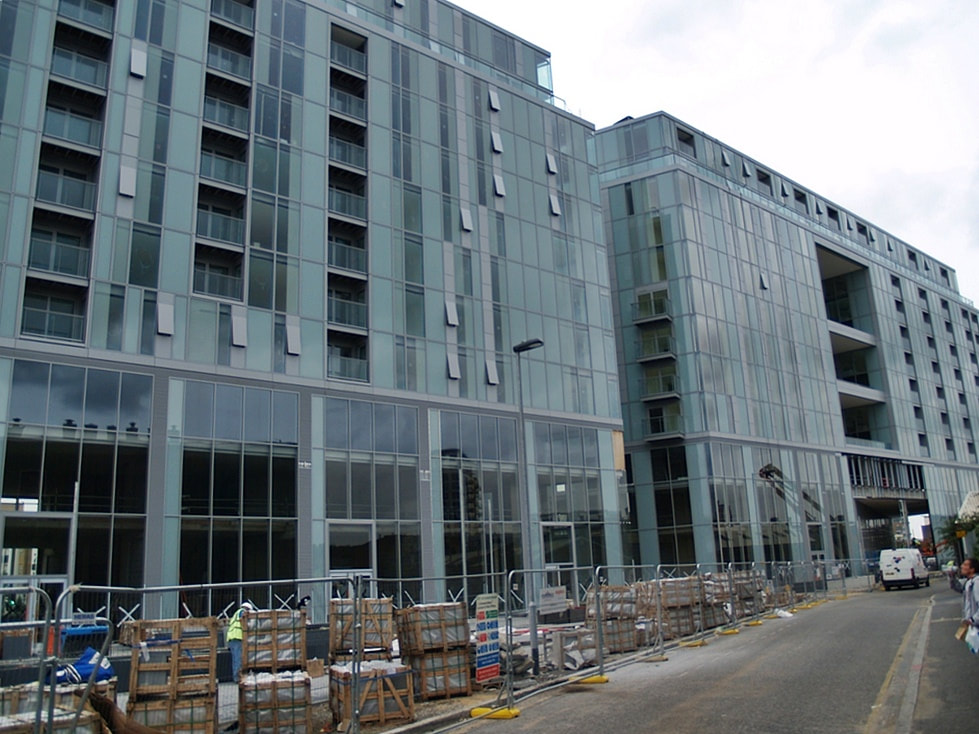 2010
​This was an interesting street a few years ago with plenty of dereliction, a few squatters, loose dogs, travellers and some old vehicles. A few derelict buildings remain on the other side of the street but where all these old pictures were taken is being transformed into a modern development of offices or flats. A few more pics taken between 2005-2007 are below. Note the original Banksy stencil next to the 'No Dumpin' sign.

Copperas was a valuable substance used in the production of acids & chlorine. It was obtained from nodules found within London Clay. In 1746 England was among the largest sources of copperas in Europe. However, methods of production was changed  during the 18th century and the Deptford works closed in 1828. Wheens soap works was also located in Copperas Street - fat from the local cattle market together with rag ‘n’ bones was used to produce candles and soap.

Below are some more pictures of Copperas Street c2005 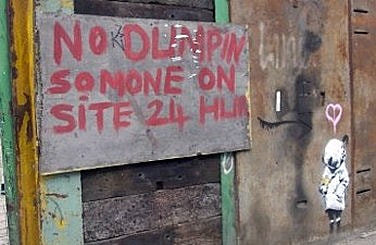 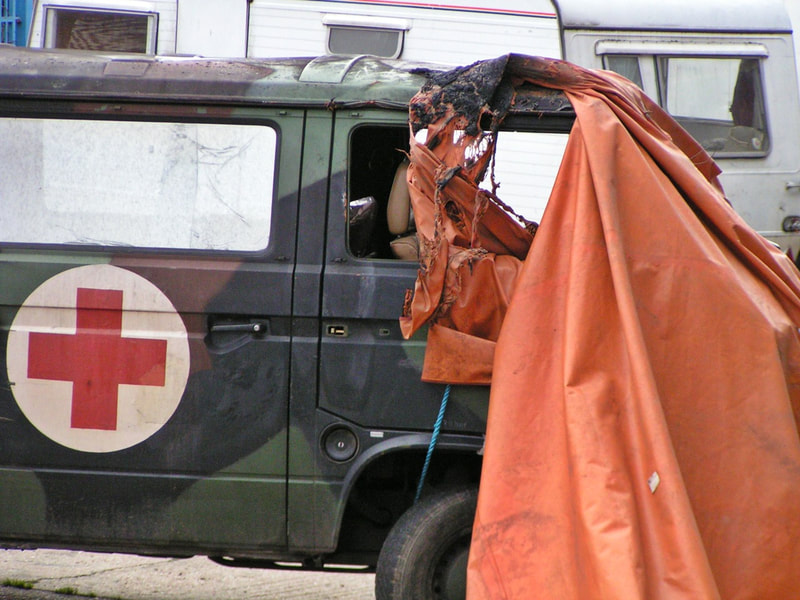 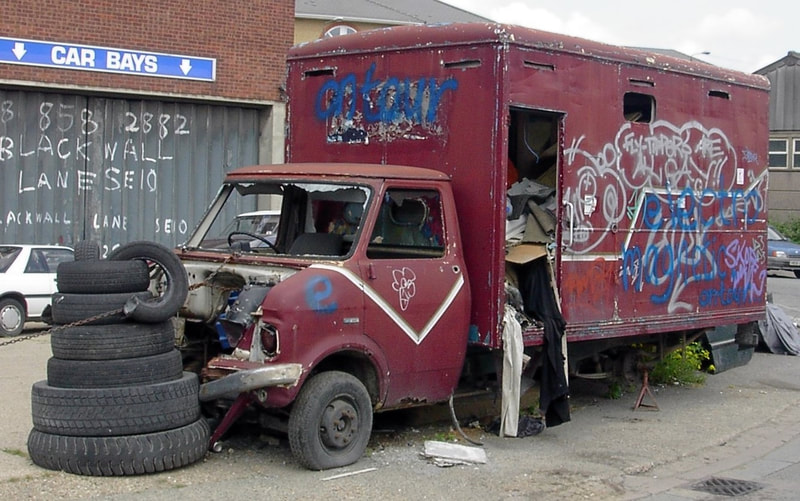 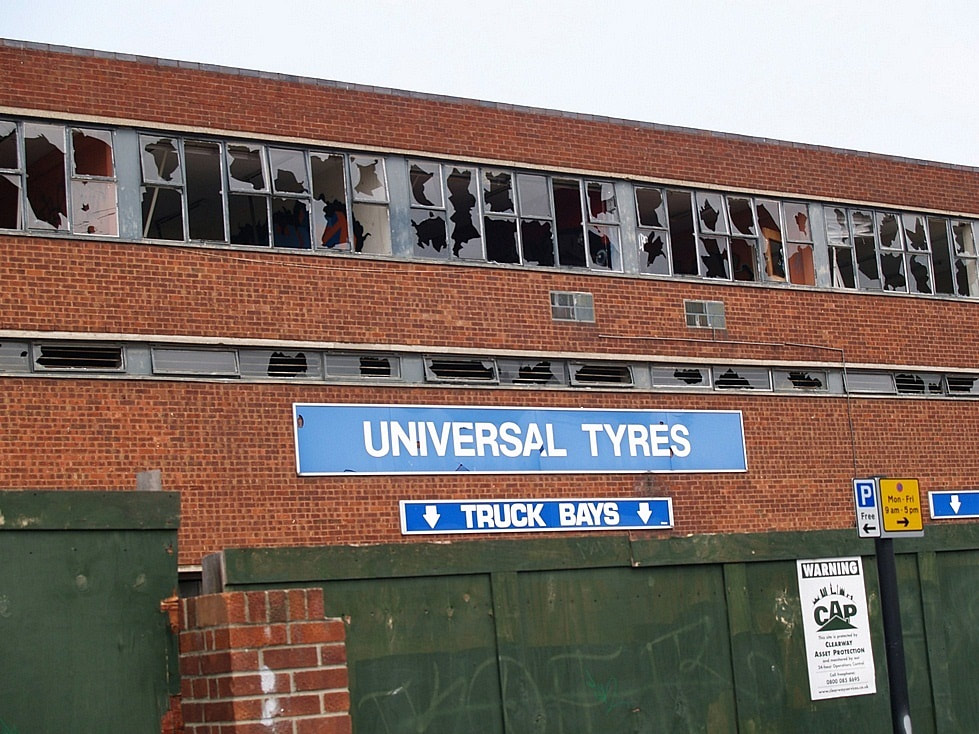 Clinton House before and after the fire
​​In 1914 the Wheatley family moved into Clinton House. Their son, Dennis,  was 17 at the time. Dennis went on to write  more than 70 books (selling over 50 million copies)  before his death in 1977. Most of these were thrillers and occult novels. In the 1960s, two of his most popular titles, ‘The Devil Rides Out’ and ‘Uncharted Seas’ (renamed ‘The Lost Continent’) were filmed by Hammer.

Before the Wheatleys moved to Clinton House, it had been the home of Benjamin Pierce Lucas, Managing Director of the Camden Town Palace of Varieties. He appears to have moved to the property around 1898. The house was built in 1884.

The building lay derelict for many years, leaving it with an uncertain future. Grade II listed status was turned down by English Heritage, because of the damage it had suffered through vandalism and decay though there were various planning disputes and opposition to demolition from local residents. Then a mystery fire destroyed the roof and its days were numbered. Due to poor security measures, the place was often used by drinkers and frequented by gangs from the local St Martin's Estate, but nobody appeared to be around when the fire brigade arrived on a Tuesday afternoon causing closure of the A205 South Circular during rush hour resulting in chaos around Tulse Hill, Brixton and Streatham.
Below are some more pre-fire photographs of Clinton House  taken in May 2011: 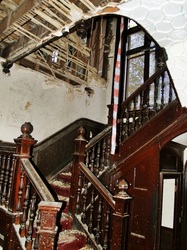 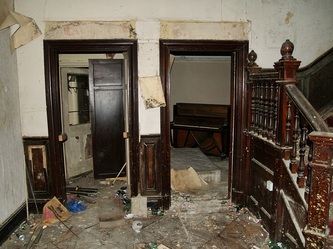 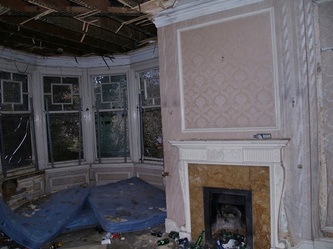 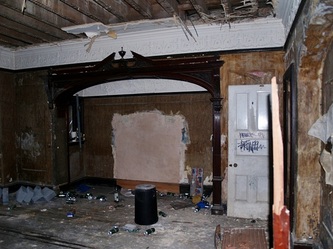 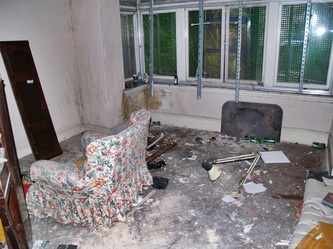 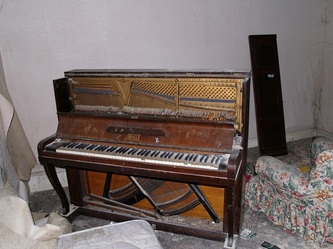 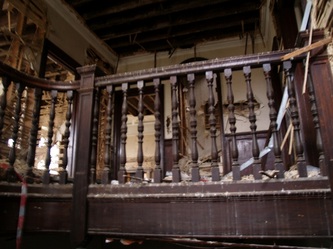 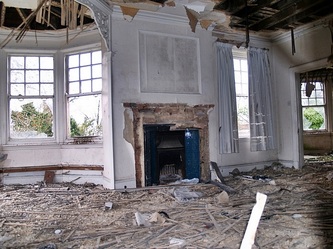 And later:
After the fire  Clinton House was in such a poor & dangerous state, and it was soon demolished thus providing a blank canvas. ​17 luxury one and two-bedroom apartments have been built on the plot with a price range of £350,000 - £560,000 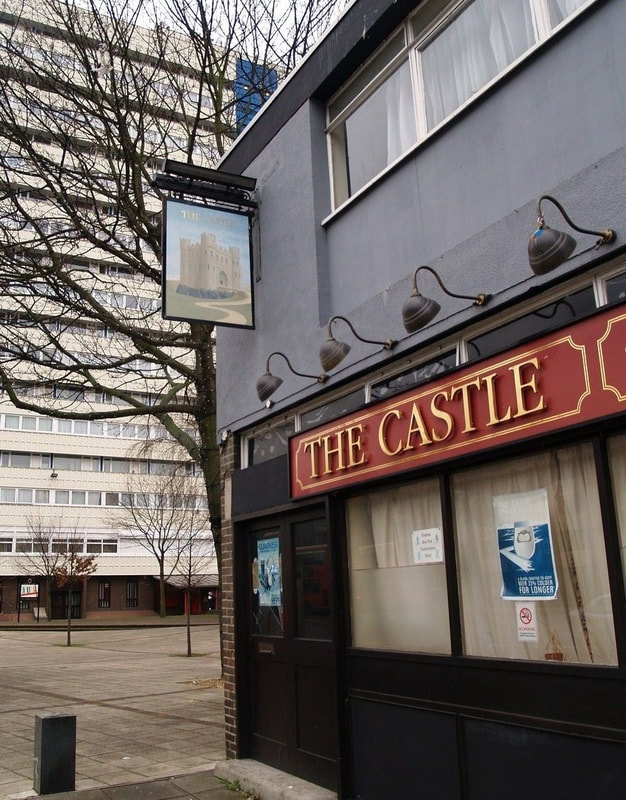 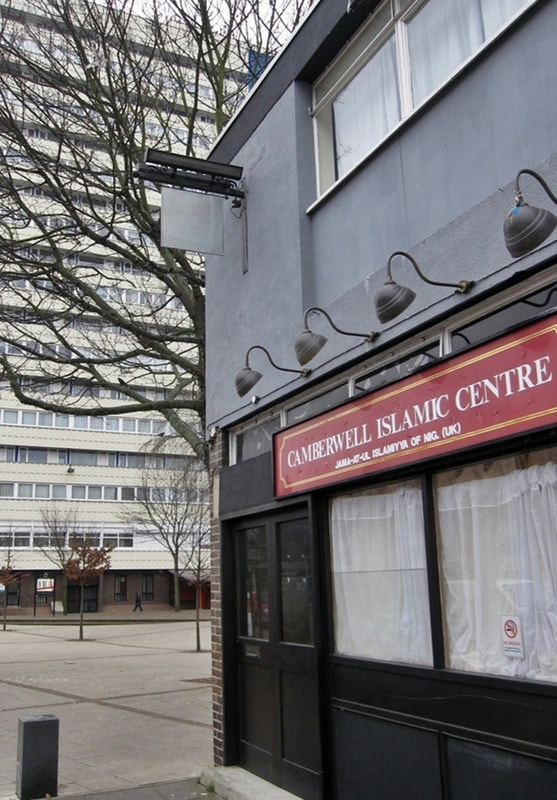 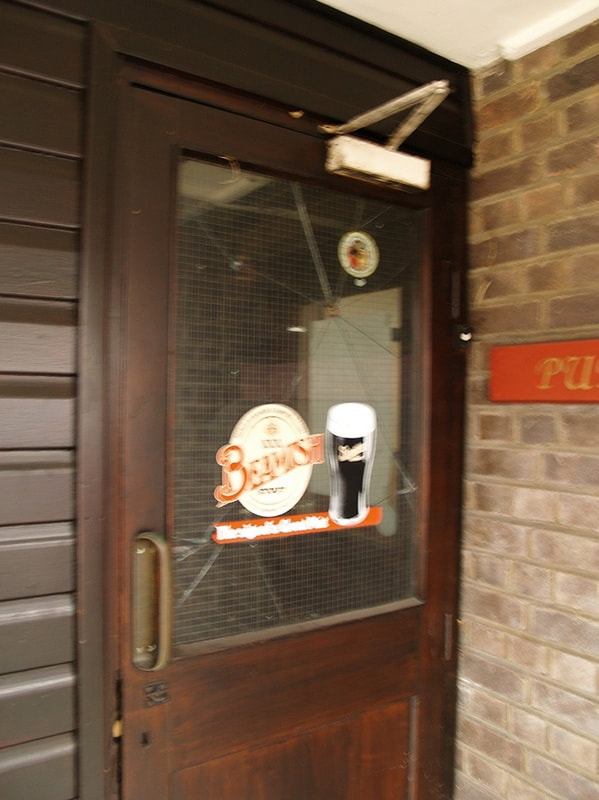 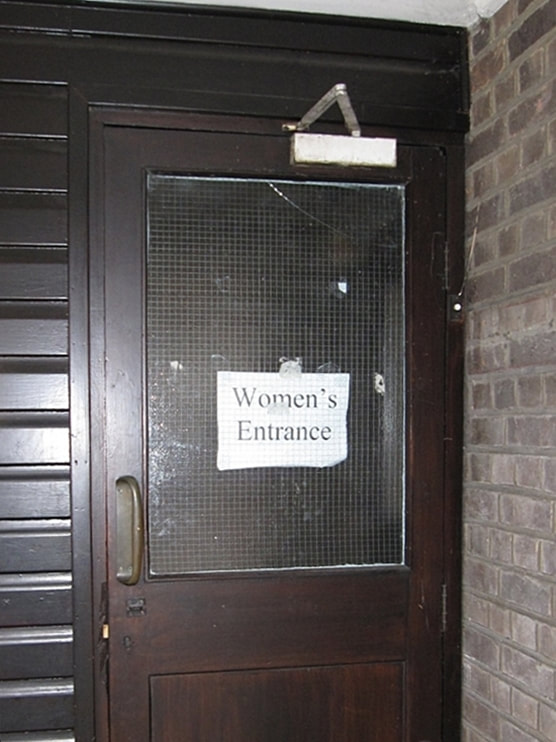 ​The Castle public house stood here from 1869 next to the Castle Hall Electric Theatre (later known as Castle Picture Palace) It was rebuilt c1960s and closed in 2008. It has been converted into an Islamic Centre. Pub pics from 2010.

​Dating back to 1815 this Grade II building was converted into flats after a brief period of dereliction following Ashtons Funerals vacating the premises. During the 1920s the building was owned by H. J. Green and Co who made chutney sauce and sponge mixture. ​
Click a link to view more Then and Now Galleries: