This section is now divided up into 4 pages. This page covers closed down and derelict pubs that have since been converted for alternative uses. This is by no means a comprehensive guide to closed down East London pubs - just a personal collection from the eary 2000s to present.

Other pics of derelict East London pubs can be found on this website at:

Derelict East London Pubs Back From the Brink 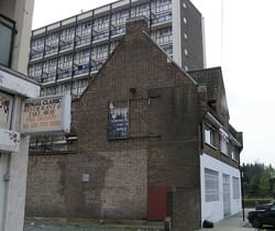 Rose & Crown in Poplar 2004
​​The Victorian pub was was rebuilt in its present form in the 1950s in this area of Pennyfields, an area where many novelists set as London's Chinatown though in reality there were seamen from all over the world living in this area. The Rose & Crown on Pennyfields closed in 2000, extended and converted to flats a few years and  a piece of the original pub sign was still visible on the side of the building but that has now disappeared and the building has since undergone conversion again - ironically into a Chinese restaurant.

The Survey of London: Volumes 43 and 44 - Originally published by London County Council, 1994 states: "There was some bomb damage to properties in Pennyfields during the Second World War. But by that date much of the street had already fallen into decay and many houses were in a very poor condition. During the 1950s and 1960s both sides of the street were compulsorily purchased by the LCC, with the exception of the Rose and Crown public house on the north side, which was rebuilt in the 1950s and still stands. All the other properties were demolished during the 1960s, to allow the building of the Birchfield Estate."

The pub used to be owned by Queenie Watts in the 1970s, jazz singer and actress who sometimes sang with an 8 piece backing band to pull in the punters.She and her husband, Slim Watts also ran the Iron Bridge Tavern, East India Dock Road (now demolished) where the Aberfeldy Village development now stands.

Queenie Watts  appeared on many television programmes through the 1960s and 1970s, including Romany Jones Yus, My Dear, Dad's Army, Dixon of Dock Green, Callan Beryl's Lot,Steptoe and Son,George and Mildred, the  film Holiday on the Buses and in Alfie, singing "Goodbye, Dolly Gray" in a memorable, riotous bar-room brawl sequence.

​The Marquis of Salisbury on Hermit Road was built c. 1881 and closed in the 1990s. The pub building remains and has been converted into flats.

Lisa Writes: "I have attached a photograph of my great gran, Kathleen, in there circa 1950s. She was of Irish parentage and my nan told me how the Landlord once asked my great gran why she wasn't going hop-picking and she said she couldn't afford it and so the landlord paid for her to go." 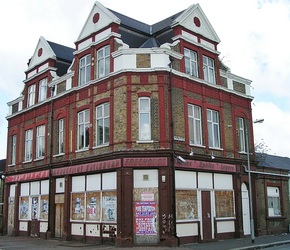 Marquis of Salisbury in Canning Town 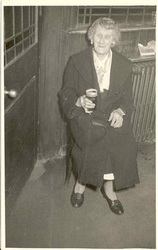 Just across the railway tracks from the Tidal Basin Tavern, there used to be regular nights that the drinkers of one pub would go to the other and drink there. This was a reciprocal agreement. The pub building has now been restored and is being used for religious purposes.
​ALDGATE E1 - THE ALDGATE EXCHANGE
​The Aldgate Exchange Pub on Whitechapel High St was a Wetherspoon style chain pub opened in 1997 and closed in 2013 and is now used as offices.

This was Thorley Taverns last remaining London pub  in the final move in a plan that would allow them to re-focus all energies onto operations in Thanet.

​The Bull on North Street is believed to date back to the 14th century when it was a guest house attached to the abbey next to St Margaret's Church.The current building was rebuilt in 1925 and was closed in 2010 and is currently boarded up. Owners have been granted permission to convert the upstairs of the listed building into 7 flats,with the demolition of existing toilets and the stable block in the rear yard to make way for the erection of two two-bedroom houses.However, the downstairs has been retained for commercial usage and will be unaffected by the development, prompting the hope that the building could once again become a pub though dont hold your breath.....

The Victorian pub on Bidder Street was once in a residential area. It was rebuilt in 1939 and limped on until a few years ago in this now light industrial area before becoming an African nightclub and now called the Pier One Nightspot. Recent permission to extend the building adding flats has been granted although the nightclub will continue.

This traditional corner boozer on Three Colt Street (formerly Fore Street) has been closed for many years. By the 1930s it belonged to a banana merchants and these days its used as offices and residential use. The angel appeared after the demise of the pub. You can see the original pub on the cover of the Lost London book

​
The Old Duke Of Cambridge on Reeves Rd closed in 2013 and & has been acquired by a property developer. It is currently being used as residential though doesnt appeared to be converted into flats yet so appears quite untouched.Millie the elderly landlady up until closure was well known for serving up complimentary sausage rolls & snacks for the customers.

The Royal Duke on the Commercial Road.  closed in 1995 and then used as a grocer's store/off license but closed in 2010 after the premises license was revoked in 2010 following a review triggered by the Police and supported by a large number of local residents. The review related to the licensing objective of ‘the prevention of crime and disorder’ following the seizure, by officers from HM Customs and Revenue, of 153 bottles of wine on which duty had not been paid; and the sale of alcohol to an under aged customer witnessed by Trading Standards Officers.

Despite its derelict appearance the pub is being used for residential purposes.

​The Marquis of Lansdowne on Cremer Street closed in 2000 and is currently offices for creatives. The pub was scheduled for demolition by the adjacent Geffrye Museum. The director of the Geffrye Museum said in 2013 that he had “no interest in the culture of the labouring classes”.This caused uproar by campaigners as if it were not for the ‘labouring classes’ the Geffrye, a museum about the history of furniture, would not have a museum.

A scheme has now been approved for erection of a 4 storey building on land adjacent to the pub and various extensions to the pub to provide residential accommodation and a cafe at ground floor level.
Derelict East London Pubs - From Dead Pubs to Conversion

This section is now divided up into 4 pages. This page covers closed down and derelict pubs that have since been converted for alternative uses. This is by no means a compresensive guide to closed down East London pubs - just a personal collection from the eary 2000s to present.

Other pics of derelict East London pubs can be found at:

Derelict East London Pubs Back From the Brink