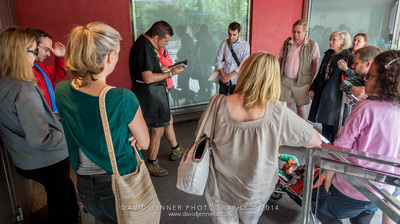 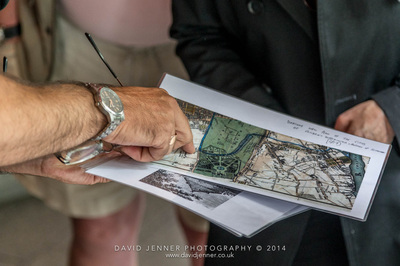 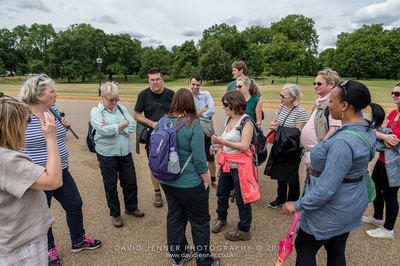 Above 3 pics are courtesy of David Jenner.
﻿"I went along on a walk with Paul Talling, which traced the course of the lost River Fleet. He was most informative and knowledgeable about his subject in a humorous and relaxed way and I very much enjoyed the day"  C Jarvis ﻿
Paul offers many different  lost river tours.Further details of  these walks can be found at: http://www.londonslostrivers.com/authors-guided-walks.html

A guided  (above ground) walking tour of the lower part of the lost River Fleet’s course. Starting off at an Art Nouveau Grade II listed pub which is decorated throughout with multi-coloured marble, mosaics, and bronze reliefs of monks. The pub stands on the site of a Dominican Monastery which stood beside the River Fleet. The walk takes in (a partial) view of the outfall chamber into the Thames, the sites of the old prisons, bridges and wells that used to line the banks of the Fleet, the Holborn viaduct which spans the Fleet Valley, Smithfield Market (including a brief look at the disused parts), Hockley In-the-Hole an ancient haunt of thieves and the site of bear-baiting where you can now hear the Fleet flowing beneath a drain cover, finishing up at the St Pancras Old Church where people once bathed in the adjacent Fleet plus a look at a few of the interesting gravestones.

Other fascinating points along the route include the Clerkenwell courthouse where the Clash were kept in the cells, the one-time derelict Lighthouse building in Kings Cross, the site on Farringdon Rd where the Labour Party was founded, the street where Charles Dickens located Fagin’s Den, the churchyard where the Beatles shot album sleeve photos and even the hotel where Tony Hadley from Spandau Ballet worked in his youth!

On this tour Paul  takes you on a relaxing walking tour around Hampstead showing you the sources of three of London's best known lost rivers - the Fleet, the Tyburn & the Westbourne and reading from his book London's Lost Rivers.  We visit the sites of wells, a lost pond famously painted by John Constable as well as the existing Hampstead Ponds & streams that form the sources of these rivers that began their descent in Hampstead towards the River Thames and shaping London's history.

Other miscellaneous sites along the way include the former London home of the black singer, actor and pioneering civil rights activist, Paul Robeson, an abandoned pig pen and a former pub that was once frequented by Charles Dickens, Karl Marx & Bram Stoker.

Whilst we will not be heading down into any sewers or enduring mountainous conditions you are advised to wear sensible footwear as the off-road terrain on the Heath is coarse, hilly and can be slippery when wet.

It's a long but leisurely one from Honor Oak to the Surrey Docks in Rotherhithe via Peckham & South Bermondsey. Along the route of this lost river we pass many other interesting sites over vastly contrasting landscapes. We also pass the routes of two of South London's other lost waterways  - the Grand Surrey Canal and the Croydon Canal.

The Peck, a tributary of The Earl's Sluice, rose on One Tree Hill, Honor Oak  and drained into the Sluice near South Bermondsey railway station. The Sluice then drained eastwards into the Thames on the Rotherhithe/Deptford border.

In May 1602, Elizabeth I picnicked by an oak tree at the summit of Honor Oak Hill. The tree came to be known as the Oak of Honor. The present tree surrounded by railings was planted in 1905 and a successor to the historic one. This tree is near the highest source of the Peck.

The name Peckham is of Saxon descent meaning 'the village of the River Peck', Peckham was the last stopping point for drovers from Kent taking their livestock to sell in London’s Smithfield Market. The only remaining above-ground section of the River Peck (or at least tributary rivulets/ditches of the said river) is in Peckham Rye. It was here in 1767 that poet William Blake had his vision of “a tree filled with angels, bright angelic wings bespangling every bough like stars." During the Second World War, temporary huts were erected here to detain Italian prisoners of war. 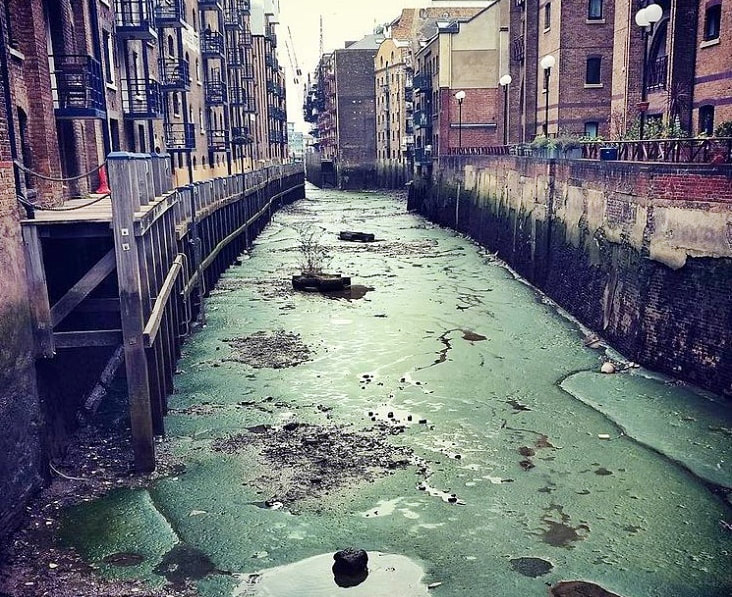 St Saviours Dock, the mouth of the Neckinger in Bermondsey

A guided walking tour around South East London starting at the one-time site of a labyrinth of millstreams, ponds and islands on the edge of Rotherhithe including a look at the remains of Edward 111’s manor house built in the 1350s

We then follow the route of the lost River Neckinger from where tidal ditches were dug courtesy of the monks at Bermondsey Abbey and a dense commercial area of factories, warehouses and mills had grown up. The area alongside the still visible mouth of the Neckinger was known as Jacob's Island, the final refuge of Bill Sikes in Oliver Twist was a 'rookery' where the poorest people lived side by side with polluting waste in slum conditions. By Victorian times, the lower Neckinger was nicknamed "The Venice of Drains" and "The Capital of Cholera".

The Neckinger flowed through a marshy area associated with tanneries and later to a myriad of factories producing the best known twentieth century brands of biscuits, jams and vinegar and latterly home to trendy restaurants and luxury flats. Along the route we pass a fading air raid shelter sign, derelict pubs, viewing the evidence of a couple of forgotten burial grounds plus an update to many of the subjects covered in the Derelict London book with 'then & now" comparisons of Driscoll House, Chambers Wharf, London Park Hotel and the Lambeth Workhouse which were all empty at the time the book was released.

This will be a relaxing all-day event walking roughly 7 miles covering so many clues of this now subterranean river and how it defined the area as we head through St Johns Wood, Marylebone and Mayfair with Paul reading from his London's Lost Rivers book and various Victorian publications and referring to archive material, ancient maps and a modern-day one showing the river now used as the King's Scholar Pond sewer which runs partly underneath Buckingham Palace.

The Ty- in Tyburn derives from a word for "boundary," and the stream has actually defined many boundaries over time including the ancient boundary of Westminster in Pimlico. The Tyburn gave its name to the village of Tyburn, originally a manor of Marylebone, which was recorded in the Domesday Book and which stood approximately at the west end of what is now Oxford Street. It also gave its name to the predecessors of Oxford Street and Park Lane, which were formerly called Tyburn Road and Tyburn Lane respectively. The earliest written mention of the Tyburn dates back to around 785 AD.

From the place where the Tyburn crossed Oxford Street, the Great Conduit was built in 1236, to supply water through conduits  from the Tyburn to Cheapside in the City. Only a small stream was left to carry on southwards and this perhaps explains the lack of marking on maps of the river after this time. Just off Bond Street, Lancashire Court was developed on what used to be the east bank of the Tyburn. It is said that here ducks once wandered about among the long grass and puddles, women did their washing at the water's edge and a hospital for plague victims was erected here near the open fields.

There will be plenty of tangents along the way such as talking about the Baker Street bank robbery of 1971, Danger Mouse, Wendy Richard, the Mayfair birthplace of Queen Elizabeth II, Twiggy, Radio Luxembourg, Banksy, Phileas Fogg, a former Prime Minister's house later described as the most haunted house in London, locations from Denis Waterman era Minder, an abandoned tube station, Harry Nilsson's  flat where both (Mama) Cass Elliott and Keith Moon died. Many more musical references en route including Marie Lloyd, Handel, Elgar, Hendrix, The Beatles, Joni Mitchell, David Bowie, Queen, Kim Wilde, Sex Pistols and Dolores from The Cranberries. There will be plenty of opportunities for toilet breaks in Regents Park, Paddington Street Gardens and Green Park. The walk will also involve a pub stop. You are welcome to bring refreshments to eat along the way. You can get home from Vauxhall or Pimlico stations which are a 10-minute walk or stay for a drink or five in The Grosvenor which is a cosy down to earth pub serving cask ales and decent reasonably priced pub food.
Sponsored Link: