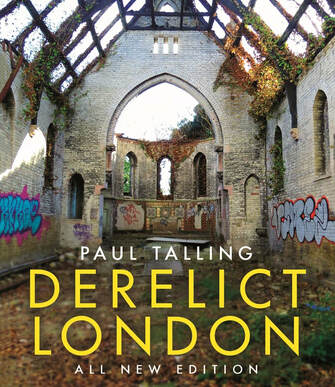 THE LONDON THAT TOURISTS DON’T SEE
​
Look beyond Big Ben and past the skyscrapers of the Square Mile, and you will find another London. This is the land of long-forgotten tube stations, burnt-out mansions and gently decaying factories. Welcome to DERELICT LONDON: a realm whose secrets are all around us, visible to anyone who cares to look . . .
​
Paul Talling – our best-loved investigator of London’s underbelly – has spent over fifteen years uncovering the stories of this hidden world. Now, he brings together 100 of his favourite abandoned places from across the capital: many of them more magnificent, more beautiful and more evocative than you can imagine.

Covering everything from the overgrown stands of Leyton Stadium to the windswept alleys of the Aylesbury Estate, DERELICT LONDON reveals a side of the city you never knew existed.
​
It will change the way you see London. 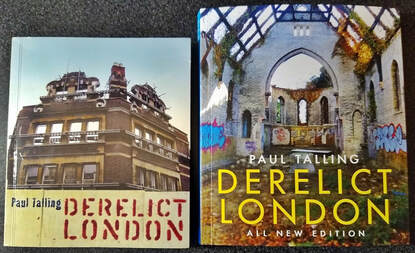 ​PRAISE FOR THE DERELICT LONDON PROJECT:

'Excellent . . . As much as it is an inadvertent vision of how London might look after a catastrophe, DERELICT LONDON is valuable as a document of the one going on right in front of us.’
NEW STATESMAN

‘From the iconic empty shell of Battersea Power Station to the buried ‘ghost’ stations of the London Underground, the city is peppered with decaying buildings. Paul Talling knows these places better than anyone in the capital.’ DAILY EXPRESS
​
‘[London has an] unusual (and deplorable) number of abandoned buildings. Paul Talling’s surprise bestseller, DERELICT LONDON, is their shabby Pevsner.’
DAILY TELEGRAPH
​
"Author, Paul Talling, prowled the metropolis for years photographing the wretched,
the ramshackle, the tumbledown and the downright sinister. It offers a moving
chronicle of living spaces that died and, for the moment, are not being revivified."
THE INDEPENDENT

"There's nothing shabby about Derelict London, a thoughtful compendium of unloved and
forgotten buildings, the necrotic ulcers in London's hidden underbelly. Photos from the
author, some taken in locations where we wouldn't want to risk an expensive SLR, are
backed up with illuminating research and tip-offs from fans of his website."
LONDONIST

"When you're done with the London Eye and Buckingham Palace, turn to Paul Talling's detail-packed blog on obscure pockets of the British capital. He'll take you on a fascinating journey of derelict pubs, World War II bunkers, abandoned buildings, and more. Chances are you won't find any of this information in the guidebooks. "
TIME MAGAZINE

"Those of us who like to explore the capital's hidden corners and forgotten byways can only applaud Paul Talling for compiling derelictlondon.com, an often uncomfortable record of the capital's underbelly. We see them every day: the disused cinemas, boarded-up shops, vermin and even human derelicts that society would rather turn a blind eye to. They may be less picturesque than Big Ben, Beefeaters and the London Eye, but they are no less part of London. Once you start noticing them, you just can't stop"
THE GUARDIAN